When Congregations Share Their Properties – 5 Principles for Good Decisions

My recent studies of congregations have shown me that a shared parking lot often isn’t just about parking. More than that, any kind of property-sharing arrangement, whether with outside groups or diverse internal groups, requires careful assessment of why and how, as well as careful tending of the relationship.

Guiding these decisions are principles that apply to any organizations that are sharing resources. But because congregations have a religious purpose, the nature of the arrangements should reflect that purpose.

From the stories I have heard, I will offer here five property-sharing principles that apply to all kinds of organizations, but I will note in each case the particular religious considerations that congregations bring to the table.

Principle 1: Determine the purposes of the property-sharing arrangement.

That’s what both landlords and entrepreneurs are advised when considering shared space for a pop-up shop or kiosk. “The Ultimate Guide to Pop-Up Shops” instructs pop-up entrepreneurs to determine their “goals, budget, and key outcomes” before searching for a landlord. On the flip side, landlords must see the benefits of dedicating space to a pop-up business.

Likewise, when a congregation and a potential property-user consider an arrangement, both parties should determine their respective purposes. A congregation should be clear about its overarching religious mission. After that, “almost everything else is flexible and open ended,” explains a manual on shared facilities from the General Board of Global Ministries of The United Methodist Church.

Some property-users may be mystified by a congregation’s religious criteria for sharing its property, but that doesn’t mean those considerations should be ignored in the negotiations between congregations and potential users. Any space can carry religious significance, and both parties should be aware that this isn’t just any ordinary space. A “Walking Tour” shared by a congregational leader and a potential property-user may help both to understand these religious considerations better. 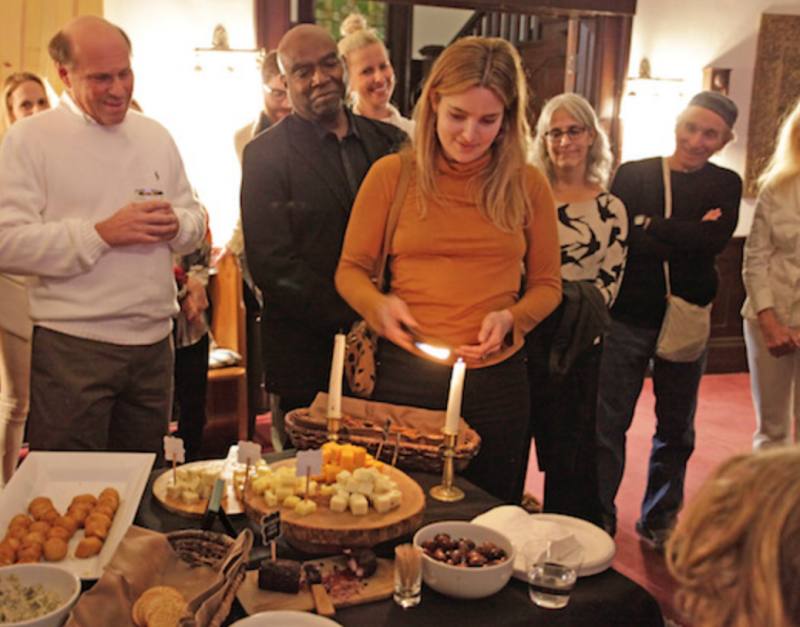 Principle 2: Specify the legitimate uses and users of the shared spaces.

There are natural and public spaces that we think of as “commons,” places potentially shared by all. Political economist Elinor Ostrom writes about our common natural resources, “The boundaries of a resource system, as well as the individuals or households with property rights, [must be] clearly defined.” This includes establishing “boundary rules related to who can enter, harvest, manage, and potentially exclude others.” That is no less true of the common space of a congregation.

A congregation has proprietary rights to determine who can use what spaces and in what ways, but those legal considerations are shaped by the congregation’s theology and its own culture. It may be useful to employ the tools on this site to explore carefully what may ordinarily be taken for granted by people in the congregation, but will need to be made explicit in sharing the property.

Even a parking lot is subject to religious scrutiny. The pastor of a Catholic church in suburban Chicago vigorously opposed allowing a nearby mosque to use the parish’s parking lot. He laid out practical objections to sharing a lot with any outside group but then focused on the main objection—his religious opposition to Islam.

Religious issues often arise over shared kitchens. In planning their common facility, the three congregations (Christian, Jewish, and Muslim) of the Tri-Faith Initiative of Omaha, Nebraska have decided upon a catering or warming kitchen in order to respect kashrut (Jewish) and halal (Muslim) dietary requirements.

Sharing a worship space carries perhaps the greatest potential for controversy. It is not uncommon for congregations to limit use of their sanctuaries to groups from their own religious tradition while allowing other groups to worship elsewhere in the building. But in New York state, for twenty years, East Island Protestant Church (a pseudonym) has permitted a Jewish congregation to cover the Christian symbols when worshiping in the sanctuary.

The way a congregation understands its space matters. Despite the presence of a large cross on the wall, Heartsong Church in suburban Memphis has never considered its worship space a “sanctuary,” instead calling it a celebration room or multipurpose space. When Muslims asked to use the building for Ramadan prayers while their new mosque was being completed across the street, the pastors reasoned that if Zumba classes could meet in that space, Muslims could pray there. But the decision was still controversial. The church lost members and received criticism from other Christians, and some Muslims wondered why another local mosque wasn’t used for the prayers instead. 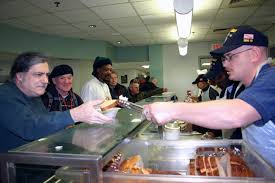 A good relationship will have both a solid contractual foundation and on-going attention. A report on joint use agreements between public school districts and other entities notes that they govern access to shared spaces such as a gymnasium or soccer field. But “joint use partnerships are no simple matter,” cautions the report. A key lesson is “the importance of a strong, positive, trusting relationship between partners.”

The relationship between East Island Protestant Church and the Jewish congregation mentioned above is sufficiently strong, positive, and trusting that covering the Christian symbols has not offended the church’s membership. Other Christian-Jewish partnerships have had similar experiences. The founders of a synagogue in Los Angeles still speak fondly of the church that covered the cross to make the Jews feel welcome when they used the building—fifty years ago!

The relationship between Temple Beth Sholom and Ministerio Jesucristo Vive presents an informative case. The synagogue entertained several bids for the sale of their building with the stipulation of continued use after the sale. One (non-Jewish) bidder would not have allowed the Jews to use the front entrance, another (Jewish) bidder would not have allowed them to use the sanctuary for worship.

Temple Beth Sholom accepted Ministerio Jesucristo Vive’s bid and, as the rabbi told me, the synagogue has never been treated like strangers in their own home. The church has been “super sensitive to our needs,” according to a synagogue leader who affectionately recounted the day temple members found church members thoroughly cleaning the building and asked them why. “It’s the High Holidays,” the Christians replied. “We have to get the synagogue ready!”

This relationship is all the more remarkable given the church’s theology. They honor the Jews because they were God’s first chosen people and still have a special relationship with God. Church members give their Christian witness through loving actions and respect, not through preaching. Their hope is that the Holy Spirit will work through this relationship to convince the Jews that Jesus is the Messiah. This potentially off-putting perspective seems to be mitigated by the endearing way the church treats their Jewish guests. Caring actions are building a trusting relationship. 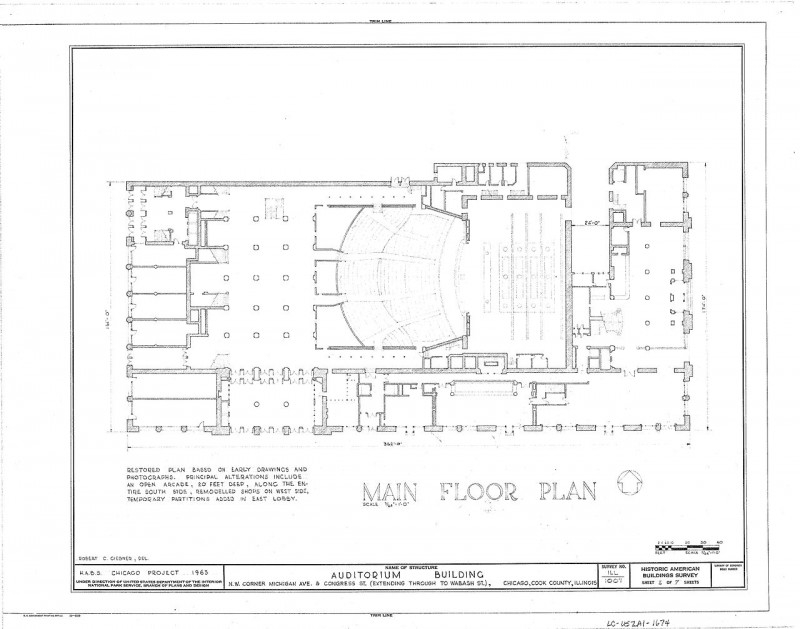 Principle 4: Develop clear channels of communication, and use them with optimal frequency.

Business people know this, and so should congregations and their partners. A manual on airport concessions recommends scheduling regular meetings between airport managers and concession managers in order to “discuss the effects of concession agreement requirements on business practices and results and to clarify any contractual uncertainties” How often is “regular”? The rule of thumb seems to be whatever works, works.

Bereshith (a pseudonym) was created in the 1970s by a Reform synagogue and a mainline Protestant church as a non-profit corporation to own, maintain, and improve a shared facility. As one congregation grew over the years while the other did not, they became unequal users of the facility, engendering feelings of unfairness in bearing the financial load.

Bereshith had prided itself for never using the conflict resolution committee built into its original by-laws. Faced with a crisis, they created a working group to devise an equitable cost/use agreement. The group’s final report reads mostly like any such report, replete with scheduling recommendations, budgetary metrics, and so forth. The religious variable emerges at the end: “We note with gratitude that we are still in this amazing interfaith situation–sharing not just relationships but also a building–that may not be extant anywhere else.”

In two separate interviews with me, leaders from each congregation pinpointed the crux of this crisis as a lack of communication: Bereshith’s founding interfaith vision had not been transmitted to a new generation of members. Without understanding why the congregations should be property-sharing partners, even the best cost/use agreement could not guarantee a mutually satisfactory arrangement. There is now renewed energy to communicate the founding vision in optimal ways.

One leader explained to me how Bereshith differs from the typical property-sharing arrangement: Bereshith offers a model for the world that includes sacrifice for the benefit of one’s partners, a motive not found in a strictly business calculus. 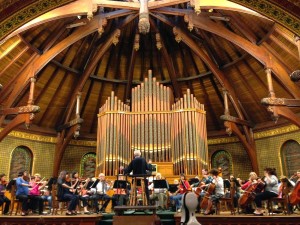 A mutually satisfactory property-sharing arrangement is not devoid of conflict but rather cultivates attitudes and means of positive conflict-transformation. “It’s okay to tell someone when they are violating your space,” writes a blogger regarding shared work areas, but do so in productive ways: “You don’t have to be mean about it.” Good advice for congregations, too!

In Bereshith’s case, the partner congregations confronted their conflict head-on, found a practical set of solutions, and transformed the moment into a reaffirmation of vision and new communication patterns for the future.

Many of the religious people I have interviewed are reticent to admit to conflict in their property-sharing arrangements, preferring less onerous terms like disagreements or snafus. One person described “a point of discussion over a silly thing.”

Yet those ideals include resources for addressing and transforming conflict in positive ways. The Pico Union Project is a non-profit corporation in downtown Los Angeles. Its facilities are used by a non-traditional Jewish gathering, three Christian congregations, and various arts and community groups. Although it is not classified as a religious non-profit, the Project is nevertheless “dedicated to the Jewish principle to ‘love your neighbor as yourself.’”

The Project’s facilities manager was taught this principle growing up as a Christian (it is found in both the Hebrew Bible and the Christian New Testament), but he never saw it as a guideline for everyday life. He left it in the pew every Sunday—until he began working at the Pico Union Project. Now he invokes it in dealing with any issue that arises there.

Multicultural congregations must negotiate the use of shared facilities by ethnic and other subgroups. Fr. Stephen Dudek, the pastor of St. Francis de Sales Parish in Holland, Michigan, explains that conflicts arise in multicultural Catholic parishes over “unfamiliar values, experiences, styles, and tastes as well as differing approaches to popular religiosity.” He counsels such parishes to cultivate “true intercultural dialogue” with an attitude of reverence: “reverence must be shown for all cultural groups within the parish, as well as for what is proving to be a new culture, the multicultural context itself. Reverence is exhibited for self and others as a mutually enriching two-way process.”

In the end – Bring both your theology and your strategic plan

Property sharing requires lots of planning and assessment – just as it would for any non-profit or business. But by definition, a congregation brings religious variables to the arrangement. While it is naïve to think that this alone will guarantee a mutually satisfactory arrangement, it is equally naïve to think that theology does not matter at all. Congregations can often extend their own mission by sharing space with others, but that requires that they first know themselves and what their mission is.

The author wishes to acknowledge grant support from the Louisville Institute.