Faith and Political Engagement: Latina/o Protestants At the Intersection

From the outside, Allen Temple Ministerios Hispanos (ATMH) is unimposing. Located deep in poverty-stricken East Oakland California, ATMH’s neighbors include two fellow protestant churches, a bar and a liquor store. It’s the week before Thanksgiving. Inside the Baptist church, Esther, the pastor’s wife and church leader, is finishing up the announcements for the close to 40 faithful parishioners. The church of immigrant and second generation Latino/a members will be able to participate in various opportunities to feed the poor and homeless on the days leading up to and including Thanksgiving. Esther stresses that members of Allen Temple should not approach the events with other churches or organizations with the need to lead but to show up with humility and to do the work that needs to be done. During the sermon after the announcement, Pastor Isai briefly speaks to violent history of Thanksgiving in the Americas. Dropping the occasional word of English in a largely Spanish language sermon, he seamlessly transitions to the spiritual importance of giving thanks to God. The congregation, solemn during the reminder of the violent history of Thanksgiving, lights up as the spiritual meaning of the holiday is discussed. The church rings out with the call and response Baptist churches are known for. By the end of the sermon, the whole church is ready to act together in the spirit of worship and fellowship.

This is not the first call to action for the small church. When the weather was warmer, many of the twenty plus youth joined youth from the predominately African American Allen Temple Baptist Church to paint a mural commemorating the lives taken by police brutality and the importance of Black and Brown unity, an idea that Pastor Isai presented to the church members months before. 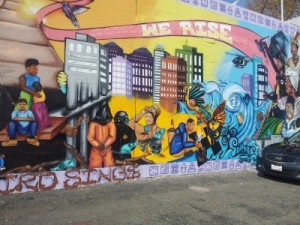 At ATMH, church leaders will occasionally blend Bible studies, evangelization opportunities, and youth groups with conversations about economic, environmental, and immigration issues. In interviews with parishioners, they speak to being open and receptive to the merging of issues that affect their everyday lives to their faith. As a largely working-class community, parishioners of ATMH actively participate in church activities that transform their communities in positive, meaningful ways. While they don’t consider their activities as ‘activism’, per se, parishioners believe that helping others out is fundamental to their identity as Christian.

ATMH serves as a microcosm of larger trends happening in Latino/a and Christian communities across the United States, connecting their religious faith with social activism. More than any other demographic race or ethnic group in the United States, Latina/os pull from their faith to find guidance for their everyday lives, including their civic and political participation.[1] Latino protestant congregations want their church leaders to express their views on political and social issues (64% of Latino/a Evangelical Protestants and 55% of Mainline Protestants).[2] The majority of Latino/a Protestants believe that they can make a difference in governmental decisions through their presence and participation.[3] A recent study (2014) conducted by the Pew Research Center found that Latina/os in the United States are doing just that – blending their faith with their political and civic engagement in innovative ways at local, state, and national levels in unprecedented numbers.[4] They draw from a rich history of popular religiosity and resistance, intimate knowledge of Biblical texts, and a close personal relationship to God in order to shape the world they want to create. They are clothing the poor, feeding the homeless, driving members to the voting polls, fasting for immigrant rights, and participating in anti-gang activities (amongst many other activities) at a far higher percentage rate than their Catholic counterparts.[5] As their numbers continue to increase (from an estimated 22.4 million in 1990 to roughly 50 million in 2012),[6] the ways in which Latina/os practice their faith will radically redefine what it means to be a person of Christian faith in the United States.

Lil Milagro Henriquez is a doctoral student in Interdisciplinary Studies through the Graduate Theological Union in Berkeley, California.