During worship at Immanuel Lutheran Church (Evanston, Illinois) on Sunday, September 24, 2017, 135 newly-made quilts were blessed and dedicated for distribution to refugees through Lutheran World Relief (LWR). Thinking about how this came to be can help us see how new resources were brought together by making connections to people and organizations throughout the congregation’s ecology – piecing things together. This is also a story about rituals and spaces and what people do together – the culture of this particular congregation. And it’s a tale of how a small individual effort became something much bigger.

Nine, about half, of the members of the Quilters group participated in the ceremony that day and accepted the thanks of the congregation for their effort. Although all women, they ranged in age from mid-twenties to mid-nineties and in experience at Immanuel from life-long to more recent members.

The sanctuary was gorgeously decorated, but more than that. For this occasion, the otherwise plain, hard, wooden pews were comfortably upholstered. At 60 by 80 inches each, the quilts were hung across every available space. If the quilts had been laid end-to-end, they would have stretched nine hundred feet, the length of three football fields. It was the seventh year in a row that at least one hundred quilts had been produced by Immanuel’s quilters. 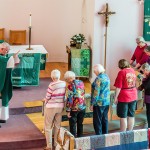 Quilting at Immanuel began at a far smaller scale thirty-some years ago. It was initiated by a member of the church’s sewing circle who was newly retired and thus able to join the daytime sewing group. She reported that quilts were needed by a local Lutheran-affiliated home for the disabled. Working together at church, the group produced two to three quilts a year. Output was greatly increased once individual women started sewing the tops on their own machines at home, and the group’s work became one of assembly. A ready-sewn top is paired with a back (often made from a bedsheet) and batting (purchased) in between, then the layers are sewn and tied together.

An impetus to boost the effort came when members of the congregation traveled to Cummings, North Dakota, to assist in Lutheran Disaster Response to the 1997 Red River floods. They met the quilters of Salem Lutheran who, along with their sister congregation in Halstad, Minn., across the river, regularly delivered hundreds of quilts to Lutheran World Relief. If they can do that, so can we, the Immanuel people thought. 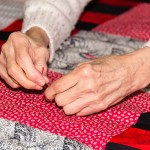 Over the years, the quilters’ output has grown while the membership of the congregation has shrunk. One factor is wide awareness of Immanuel’s quilting on the part of Evanstonians who see quilts on display while they shop at the off-season farmers market the congregation hosts. About a third of the quilters are actually volunteers who are not members of the congregation but drawn to its mission. Well-wishers in the community also donate fabric. A couple of years ago, just as a quilters’ session was dispersing, a large stash of fabric was found in two bags just outside the door to the parking lot. Other fabric donations come through Evanston Freecycle. An especially large stash of fabric was donated when a church member saw several crates of fabric displayed at a garage sale in his neighborhood and, hoping for a discount, asked how much the whole bunch would cost. “What do you want it for?” the neighbor asked.  Hearing the answer, “For quilting at our church,” she replied “Just take it.  Take it all.”

The quilters enlist the money and energy of the congregation in several ways. Before the quilts are shipped, five are put on display in Fellowship Hall to compete for the honor of most beautiful quilt of the year. The winning quilt is determined by the number of votes, in the form of $1 bills, stuffed into a box under each one. In 2017, the quilters ran a lottery during after-worship coffee hour. For $5, members could guess how many quilts would be produced that year by choosing any number from 100 on up. The proceeds are used to defray the quilters’ biggest cash outlay, for rolls of batting.

After the quilts are dedicated, they are packed into shipping boxes (another donated item) and driven to an “Ingathering.” For Immanuel in 2017, this was another Lutheran congregation in the Chicago suburbs, whose own volunteers loaded them onto a truck bound to the Lutheran World Relief warehouse in Maryland. Although in recent years the quilters themselves have been women, the congregations’ men are disproportionately involved in the camaraderie of packing and shipping.

Although LWR offers a method of tracking where a congregation’s quilts (and other donations) ultimately reach those who will use them, the group at Immanuel found the procedure cumbersome on their first try. One quilter wished that they could sew into each quilt a greeting from Immanuel Lutheran Church, but that idea was abandoned when another member pointed out that people using the quilts might be put at risk if evidence of their origin came to the attention of factions in a refugee settlement who are suspicious of Christian meddling in their world. Now, the LWR website specifies that quilts may not feature religious or patriotic symbols or messages. The quilters are content to know that most recipients use their quilts to provide warmth, even in warm climates, where temperatures can drop dramatically at night. But the quilts’ versatility also makes them useful as simple tents, floor coverings, or wraps to hold a baby on a mother’s back. According to the LWR website, recent shipments went to refugees in Congo, Haiti, India, Lebanon, Thailand, Ukraine, and other countries. In 2016, 346,170 quilts were produced and distributed worldwide.

For Immanuel, quilt making elevates a volunteer activity into a ministry that bridges generations and genders within the congregation and links the church to the local community, to other Lutherans in America, and to refugee camps across the world. Immanuel quilters quite tangibly make the congregation part of something that is immeasurably bigger than we are. 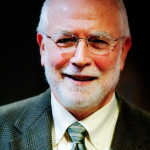 R. Stephen Warner is Professor Emeritus of Sociology, University of Illinois, Chicago, and a former member of the Congregational Studies Team.  Among his many contributions to the study of congregations in the US is A Church of Our Own: Disestablishment and Diversity in American Religion (2005). He is also a faithful member of Immanuel Lutheran.