Toys are not Guns: Changing the Way our Children Play

In February 2013, our congregation had a month long celebration of Black History Month activities.  From film viewings to forums, the Washington Tabernacle Baptist Church of St. Louis, MO, had an array of opportunities to learn about historical and current issues that are directly related to African Americans.  Our forum, titled “From Newtown to Our Town: Guns and Youth Violence,” focused on the effects of gun violence in St. Louis on children and families.  A former St. Louis police chief was the moderator, and there were government, corporate and non-profit representatives on the panel.  At the end of the forum, the pastor, who is also my husband, concluded by announcing that our church had decided to host a toy gun buy back initiative as a way to spark meaningful conversation about the culture of violence in our society and question the import of children mimicking the very behavior that is decimating our community. 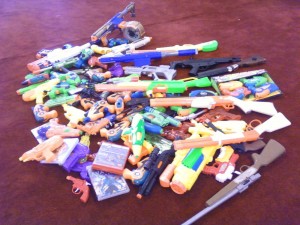 There was a reporter covering the forum for a local newspaper.  He wrote a lengthy article about the forum, and mentioned our intention to host a toy gun exchange in the summer.  To our surprise, the article was picked up by many online news outlets/blogs, and thousands of folks weighed in on the toy gun exchange.  Our church received phone calls, emails and messages that were very hateful, condescending, and often racist.  My family’s picture was posted on several “You can’t take away our 2nd amendment rights” websites, youtube videos were made mocking our church and the initiative, and too many articles to count were written about my husband – calling him everything but a child of God.  One was even written by a national columnist for the Washington Post!

We never imagined that anyone, let alone national journalists, would care what a modest sized church in St. Louis was doing as a community outreach event.  Our church was faced with a major decision:  In the interest of safety, do we cancel the toy gun exchange due to the negative and hostile feedback? Or, do we proceed as with the event as planned?  We rejected both of those options.  Our initial plan was to host the toy gun exchange at our church and advertise it to the surrounding community.  However, the over-the-top outrage expressed by our desire to take toy guns away from children and replace them with more life affirming toys sent us a very clear message:  we had struck a nerve.  Why were so many people so outraged by this idea?  They don’t become this outraged when talking about taking art and music out of school or eliminating after school activities, so why all of the angst about taking away toy guns?  Why was this equated to gun control rather than giving our children an imagination for something other than violence?

We didn’t try and answer all of these questions (although I have hunches); however, we did decide to expand our efforts and see if others wanted to join us.  And lo and behold, they did.  We “pounded the pavement” and invited as many churches as we could throughout the St. Louis region to join in.  The majority of churches did not respond, a few declined, a couple said they would make an anonymous donation, but some openly joined the effort.  As a result, the toy gun exchange was held on July 13, 2013 at three different community centers around the region.  All of the community agencies that work on behalf of families and children that we asked were eager to participate, and we were heartened by the tremendous amount of support from the St. Louis region.  However, we were surprised that more congregations did not see this as worthwhile effort in a city that has some of the highest incidences of gun violence in the country. This effort was started as an expression of our faith, and a vision of God’s kin-dom that promotes human flourishing for all.  Children learn through play, so why not challenge the logic that violent play remains part of their repertoire?  Shouldn’t congregations, whose weekly message usually has something to do with love, grace, forgiveness, or repentance, lead the charge in promoting a less violent culture – especially for the sake of our children?

Gun violence is not child’s play.  It is a very real threat to the well being and thriving of individuals and communities across this country – many of which happen to be disproportionately black and poor.  It is a public health issue and a public safety crisis, which will not be solved by adding more guns to the already overflowing mix.  Many say “I played with toy guns, and I’m fine.”  Perhaps, and if it were still 1950 the point may be relevant.  But it is 2014 and the aggregate of children’s exposure to guns and gun violence is far greater now than then. The mission of the Toy Gun Buy Back Initiative was to spark meaningful conversation about the culture of violence, and encourage parents and caregivers to change the way our children play.  We have the power to choose what we put in our children’s hands.  Why not choose toys and activities that will stimulate their intellect, nurture their creativity, and enliven their spirits?

The renowned educator and civic leader Mary McLeod Bethune said “We have a powerful potential in our youth, and we must have the courage to change old ideas and practices so that we may direct their power toward good ends.”  It is of no emotional, spiritual or physical value for our children pretending to be violent; we need them preparing to be kind, creative, intelligent leaders of tomorrow.