A variation of the walking tour is a great way to explore a congregation’s context: walking with cameras. These days most people have access to photographic equipment in the form of a mobile phone, digital camera, or disposable camera. Whatever technology one employs, one should think of cameras as tools for collecting information and photographs as a way to explore questions.

A recent trip to Antwerp, Belgium provided an opportunity for me to explore an unfamiliar city visually. As an academic researcher, I was curious about religion in Europe and did a bit of walking with my camera to conduct a photographic survey. My work was informed by the question “Where does religion show up in material culture in Antwerp?” I decided to focus on material culture because I am interested in the ways people use symbols, art, and architecture to construct identities. Likewise, I’m curious about the ways buildings are repurposed (converting churches to night clubs or mosques, or storefronts to churches). One’s interests, however, need not be so academic. Congregational leaders and members would do well to simply be curious about the needs and service opportunities present in their neighborhood. 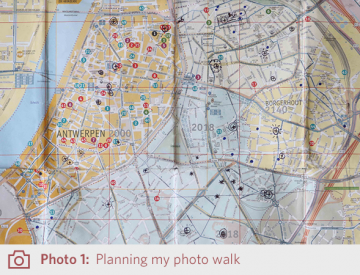 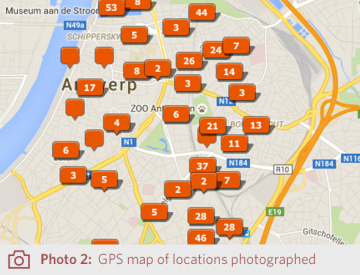 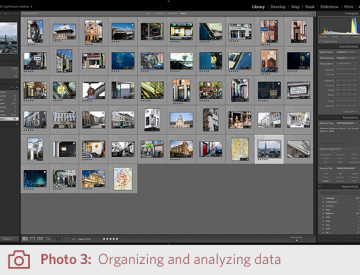 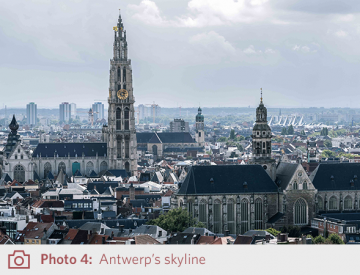 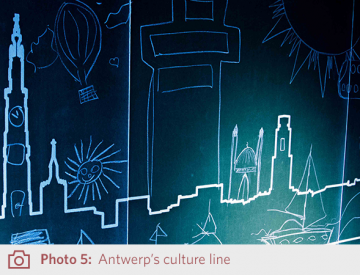 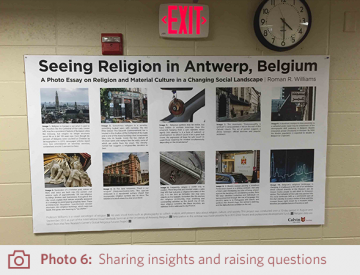 As an outsider, I did not know much about religion in Antwerp. I knew from reading that Belgium is roughly two thirds Catholic, but that very few people attend worship services with any regularity. I also was aware of a sizable Jewish community and that immigrants with Muslim backgrounds live in several neighborhoods. A Google search for the terms church, synagogue, and mosque oriented me to the locations of congregations, which I noted on a paper map using symbols I made up to keep track of where I would find different types of congregations (Photo 1).

I spent a weekend walking and biking through the city. Along the way my GPS-equipped camera, a Canon 7D Mark II, helped keep track of where (and ultimately what) I photographed. This is a useful feature, but not essential. When I loaded the photos onto my computer, the software I use (Adobe Lightroom) mapped out the location of every shot (Photo 2). One could use the photo software built into their computer’s operating system (e.g., Apple’s Photos App or Microsoft’s Photo Gallery) or an online service like Google’s Picasa. Comparing my paper map to my GPS map, I managed to visit to many of the places I had hoped while giving room for curiosity, opportunity, and luck—or providence if you prefer—to shape my journey.

My next step involved exploring the photographs I took and organizing the data around keywords. Examining a screenshot of Lightroom (Photo 3) offers a couple of tips for making sense of one’s photos. First, notice that I take multiple photographs of the same location from different points of view, distances, and camera settings. This practice of taking several photos of the same scene comes in handy when thinking about what is important in the photo and the best way to present that information to others visually. I also find that, despite my best efforts, some of my photos are not as productive as others: they may miss an important feature of the scene, be slightly out of focus, or have some other drawback or flaw. Multiple photos in the same location helps to address these shortcomings.

The Lightroom screenshot also reveals some of my keywords in the bottom left. I developed these words to help me keep track of and categorize elements of the photos (e.g., church, mosque, symbol, food, repurposed). This work helped me to see patterns in my photographs such as frequency of themes. Likewise, labels made it possible to filter all the photos so that I could look for intersections in the visual data such as where a mosque and church might be in such close proximity that they appear in the same photo. I use Lightroom’s built-in rating system (1-5 stars) to select the photos that best represent the themes that emerge from the photos. Once the photos were labeled, my analysis helped me to think about what I saw as I walked through Antwerp. A narrative began to emerge about the state of religion in this city. The arc of this narrative can be seen in two of the photographs.

Looking out across the city from atop Antwerp’s Museum aan de Stroom (MAS), the skyline of the city resembles that of many other European cities (Photo 4). Churches such as the Cathedral of Our Lady (center left) are important landmarks. While these churches were more central to social life in the past, 5-percent (or less) of the population are said to attend worship. This story of religious change and the challenges that surround it come to life at the exit to an exhibition a few floors below the museum’s observation platform where I photographed the city’s landscape. As visitors exit an installation about cultural diversity, they are invited to add detail to a chalkboard that depicts Antwerp’s skyline (Photo 5)—or perhaps it’s culture line. Some of the features, such as the Cathedral of Our Lady (left), are a permanent part of the social landscape, painted into the skyline. Other features, such as the mosque (center right) are added in chalk.

Other photos I collected during my walking tour help to add detail and nuance to this broader narrative. And by selecting ten images, I was able to convey some of what is happening in Antwerp in the form of a bulletin board near my office at Calvin College (Photo 6). It stands as an example of the way one might use photographs generated by a visual walking tour communicate insights and raise questions. This exercise can be conducted as an individual or with a group. It could employ camera-equipped cell phones or disposable film cameras, and everything in between. And the photos may be used in a variety of ways, including small group conversations, with leadership and ministry teams, with youth or adults, as part of a self-study or study of one’s community.

In light of recent violence in Brussels, and the potential of suspicion and backlash against the Muslim community, walking in a Belgian city with a camera would take on a different dynamic. It would be problematic for someone who looks like me (white, western, and affluent by world standards) to photograph their way through the many ethnic enclaves in cities like Antwerp or Brussels. I would approach my camera walk differently today than I did prior to these events. Recruiting a Muslim friend, for example, who would walk with me seems a good strategy. And the activist-scholar inside of me might want to do something more: organize an interfaith camera walk that brings together a diverse group of participants or at least members of two very different congregations. I imagine walking and photographing together would be a productive way to engage congregations. Talking about photographs could be the starting point for conversations that lead to mutual understanding and solidarity. Whatever one’s context, it is important to be aware of the broader social conditions into which one walks, and to exercise wisdom about the best way(s) to navigate and photograph that territory.

Dr. Roman Williams is an Assistant Professor of Sociology at Calvin College. He received his Ph.D. in Sociology at Boston University. He was the 2014-2015 Congregational Studies Visual Methods Fellow.